A new edition of my trauma theory book is now available in affordable paperback and Kindle editions: Trauma Theory As an Approach to Analyzing Literary Texts: An Updated and Expanded Edition, with Readings. Eclectica Magazine has published an article excerpted from the book in its April/May 2021 edition. Currently listed at Amazon, but soon everywhere. See the sell sheet. 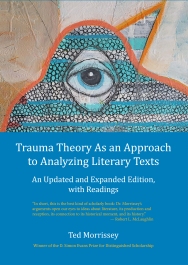 Foreword by Robert L. McLaughlin
New Introduction by the Author
Chapter 1: The Correlation Between Trauma and Literature
Trauma and Psychoanalysis
The Power of Language
Group Psychology
The Development of Civilization
Transmission of Mood
Jacques Lacan and “imago”
PTSD and Collective Trauma
Narrative Memory and Traumatic Memory
The Unreliability of Traumatic Memory

Chapter 2: The Postmodern Voice
Literary Postmodernism
Defining a “Postmodern Text”
Characteristics of the Traumatized Voice
Intertextuality and Postmodern Language
Repetition and Its Many Forms
The Dispersed or Fragmented Voice
The Search for Powerful Language
Language and Trauma
Trauma and Postmodernism

Chapter 3: Twentieth-Century Trauma Culture
Birth of the Atomic Age
The Measured Self and the Apocalyptic Self
Post-Hiroshima America
Trauma Culture’s Otherworldliness
Daily Reminders of Armageddon
The U.S. as a Posttraumatic Culture
The History of World-Destroying Technologies

Bibliography
Index
Readings
“In the Heart of Heart of the Cold War”
“William H. Gass’s ‘Very Cold Winter'”
“The Trauma of Alcohol Abuse [in ‘The Pedersen Kid’]”
“Locating Our Common Humanity through Expressive Writing”

The 2016 edition (available only in hardcover):

Trauma Theory As a Method for Understanding Literary Texts: The Psychological Basis of Postmodern Heremeneutics (Edwin Mellen, 2016) is a multidisciplinary work that responds to the question “If we associate postmodern literature with the period between the conclusion of the Second World War and, roughly, the end of the twentieth century, why have seemingly postmodern texts appeared in centuries far removed from postmodernism?”

“I find that Dr. Morrissey’s arguments both fascinate and raise further questions for us all to consider.  What makes an age traumatic?  Are some more traumatic than others?  Surely, the perpetual violence of the British medieval period and the nuclear-apocalyptic anxiety of the United States’ cold war period justify our seeing them as trauma cultures.  But was Georgian England sufficiently traumatized by the succession controversy to produce Tristram Shandy?  If so, are the standards for trauma such that any culture could be considered a trauma culture? … In short, this is the best kind of scholarly book: Dr. Morrissey’s arguments open our eyes to ideas about literature, its production and reception, its connection to its historical moment, and its history; they also raise questions for us to engage, to up the ante on what we think about when we think about postmodern literature.” — from the Foreword by Robert L. McLaughlin, Illinois State University

Postmodern literature is associated with the decades following the Second World War. However, there are numerous examples of texts produced before 1950 (in some cases, centuries before) that demonstrate the characteristics which have become associated with postmodernism—namely, intertextuality, repetition, fragmentation, and language experimentation. Such “postmodern” texts prompt the question: What cultural factors cause writers to create narratives bearing the marks of postmodernism? One method of analysis that can help to respond to this question in a fruitful way is literary trauma theory, which is founded on the notion that trauma causes one to articulate the traumatic event in much the same way that a postmodern writer structures narrative. Literary trauma theory seeks to identify “trauma texts,” that is, texts that employ intertextuality, repetition, fragmentation, and language manipulation to create meaning due to extreme traumatic stress. In the twentieth century, the works of William H. Gass appear to be prime examples of postmodern trauma texts. In earlier centuries, the Anglo-Saxon poem Beowulf is an epitomic example of a trauma text. What is more, an instructor’s awareness of the correlation between trauma and text production can have profound pedagogical implications in the writing classroom.